Do you use a pill box?

Someone on dialysis usually takes a lot of medicines! For the longest time, during life with CKD, I never used a pill box. I had a big plastic box in which I had all my medicines and would take them as per my prescription which was stored in my head. Every now and then, some medicine would finish and then I would call my dad and he would arrange for it to be bought. After a few days, another one would finish and then another call to my dad and that would be arranged as well. Yes, my dad spoils me totally (even at this age!)

At one point, I started ordering medicines for the entire month. I would open this plastic box and then lay out all the remaining strips and then calculate the number of each tablet I needed, write it on a piece of paper and give it to my dad who would have the whole lot brought. Mostly, unless there was a change in prescription or I calculated wrong (which rarely happened!), I would be good until the beginning of the next month.

However, sometimes, I would get delayed in my stock checking exercise and this would result in me running out of a medicine suddenly and then frantic phone calls to my dad.

The first time I saw a pill box being used in India was when my aunt bought one for my grandmother who being diabetic, took a lot of pills as well. She kept forgetting her meds and this helped her never miss her dose. Great idea, I thought!

At Aashayein last year, we gave out pill boxes to all the patients and I took one for myself as well. Ever since then I have been sitting every Sunday morning after my customary visit to Poorna Tiffins and refilling my pill box. It has 21 sections for seven days a week, three compartments for each day - for morning, afternoon and night.

This has helped greatly. It serves two purposes. One, I need to remember or refer to my prescription just once a week while filling. And two, when I am going to run out of a med, I know on Sunday morning itself rather than in the middle of the week and I can make arrangements immediately to get them.

Here is my pill box after I filled out this week's medicines: 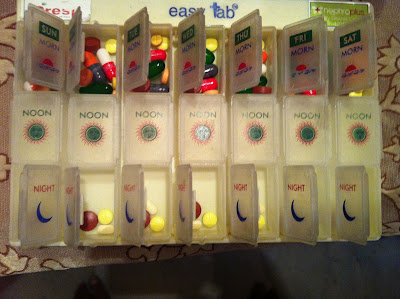 i am a transplanted patient.. and i usually took over 25 pills a day.. so for me pill box is perfect...i also have to use alarms...cause i have to take those pills on time...
i used to have the same as u but in my case i always missed one or two pills..
thanks a lot for sharing this experiences with everybody

My 84 year old mother needs to take a few pills every alternate day, and one has to be cut in half. This is part of a menu card of pills. I have two pill boxes for her to cover two weeks, as I may have to travel out of town. The pill boxes have 4 compartments a day - Morning, Noon, Evening and Night - as she needs to take one particular pill at 6 pm every day.

No one else in my family takes up the job of refilling her pill box. There is a written prescription with her set of medicines which anyone can follow, and my family has Graduates, PGs and even PhDs. But for some reason, I am the one who has the final word on what my mom should have. Makes me feel useful, I guess.

Bottom line: Pill boxes are essential especially if the patient is old or forgetful.

My pill box also has detachable daily boxes. So, for example, if I am travelling, I can pull out one or two day's worth of boxes and carry with me.

Where did you buy yours Vinod?

I notice that the pills are kept loose in the pill box.
Is it recommended to remove them from there cover (or bottle) and keep them in this box.
What about the effect of humidity and/or other environmental effects on these medicines?

Good question by Anonymous reg loose pills in the box...

I have bought pill boxes for my father at hospital pharmacies. The two my mother uses are from the US - brought by my sister on two diff occasions.

The box my father used to use are the ones where each days "strip" can be pulled out from the box. like the one you have. My mother's boxes are of the fixed type.

Pill Box is really helpful. Where I can get in India? Pls share contact numbers to order for my father & grand parents. I live in Bangalore. Thanks!

These should be available a Reliance Wellness or Health store. I don't have numbers, I'm afraid.

How to store medicine from strip. Please advise if I cut it from strip and store in pill box what about continmation

That is a valid concern. But I make sure the pill box is clean. I don't take any other special measures. I don't know if it is totally safe though. I continue to use it.