I got into the British Airways flight to London enroute to Seattle at about 6:50 in the morning on Thursday the 12th of July. It was a very comfortable flight. I did not sleep much. They served elaborate three course meals. The entertainment was kind-of limited but not too bad. The only Hindi movies they had were 'The Dirty Picture' and 'Ladies versus Ricky Behl'. When the former was released, I had, for no particular reason decided never to watch it. I changed my mind during this flight. It wasn't bad. I also watched some Olympic Games (being held in London from the 27th of July) related stuff which was really nice.

We reached London at about 12:45 in the afternoon local time after about ten and half hours of flying. I went to the British Airways lounge and had a shower and a light snack. I also sent out an  email to my folks at home. The flight to Seattle was to start at about 3:30 in the afternoon. I had to take a train to another terminal and then boarded the plane. This plane was much better than the one to London. It seemed that the earlier aircraft was older and more rickety than this one.

I managed to sleep quite a bit on this flight - probably because it was night time in India, my native time zone. I reached Seattle quite fresh and relaxed.

Dinesh came and picked me up at Seattles's Tacoma airport. My first impression of the city was that it was very green. There were lovely evergreen trees all around. The roads were very clean. 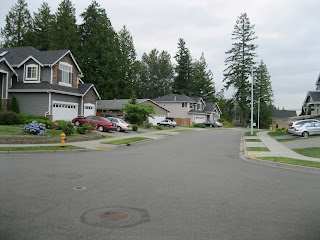 That evening my other two friends, Chetan and Kamal Kumar also got to Dinesh's home. We had dinner and spent the next few hours chatting and catching up on old times!

Dinesh's wife Yogita made some renal friendly food for me. For the first time, in many years, I would need to follow the renal diet and watch my fluid intake!

Contrary to expectations, I slept very well. No jet lag at all.

I had initially planned to get two sessions at Seattle, on Friday and Saturday evening. On Friday morning,  I called the center I was booked with in Seattle to confirm that my slot was confirmed. Suddenly I was told that they do not have an evening shift there! I got in touch with the lady I was co-ordinating with when I was in India. She made a few calls but called back to say she could not help. So then, I went for the afternoon shift. I was also told that on Saturdays they don't even do the afternoon shift. They do only the morning shift and I would have to to go in by 6:45 in the morning the next day.

The dialysis session went off very well. I had put on about 3 liters in about 48 hours and pulling it off wasn't difficult. At home I run at a blood flow rate of 250 ml/min because I do about seven hours. Here, I ran at 300ml/min because it was my first session. I would need to go to 350 or 400 to get good clearances with the shorter run time.

Bill Peckham had said in a reply to a post I put up on the 'I hate dialysis' forums asking for tips on dialysis in the US that if you cannulate yourself, the centers generally respect you and allow you to have more say in your treatment parameters. I found this to be very true.

I had taken my buttonhole needles and realized that I was very lucky to have done that. I initially wasn't planning to take them but my mother advised me to carry them. When the staff at the center learnt that I use buttonholes and can cannulate myself, they also allowed me to set all my other parameters which gave me a lot of comfort since I was worried about how I would be able to tolerate the much harsher treatments patients in the US are used to. 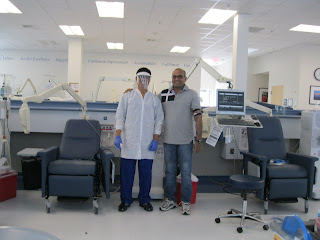 At the Davita Everett Center in Seattle

One thing I loved about Seattle was that apart from downtown, most buildings had only the ground floor. This, added to the greenery and cleanliness, gave it a very nice overall feel. It was as if we are at a hill station with a small and simple population.

On Saturday evening, we went to Lake Washington where Dinesh had hired a speed boat for two hours. We were on or own. We drove the boat quite fast in the lake which was very huge. This was great fun! 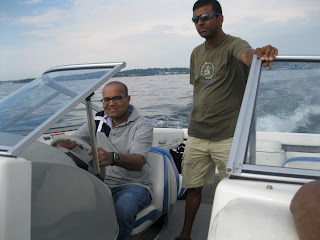 On Sunday morning, the weather was excellent! There was a slight drizzle and it was colder that the previous two days. We headed out in three cars for Vancouver. We would try to reach by around 3 p.m. after accounting for lunch in between.

This journey should ordinarily have been fairly uneventful. But it was not to be. In keeping with the theme of 'everything that can go wrong will' on this trip, this journey proved to be the most 'edge of the seat' for all of us!

Glad to hear from you Kamal :)! But what's with the 'eventful' journey?

Was looking for this update kamal!

Have a lots of fun on your dream trip to Niagara!!