I took a flight to Los Angeles from Vancouver on the 22nd of July. My brother picked me up from the airport. Almost the whole of that week was going to be spent in different parts of the state of California. California, despite being a state belonging to a country, has an economy that is larger than all but eight countries in the world!


My brother and I had dinner on the night of my arrival with an uncle who's been in Los Angeles for decades now. He took us to BJ's Restaurant and Brewhouse, a very cool place. There, as my brother and he chatted about how Kobe Bryant might or might not retire in two years from now and how it might or might not affect his team's chances at something (I forget what), we dug into the most innovative and tasty method of serving soup. We ordered a Tuscan Tomato Bisque and a Broccoli Cheddar. They bake bread in the shape of a bowl and serve the soup in that freshly baked bread-bowl. So, you basically take a spoon and scoop out some soup along with the bread that forms the bowl! Heavenly! Here's a pic:

The next day we decided to go to Universal Studios. As we reached the place, we found that there was a huge crowd of cars waiting to get in. My brother found that strange for a weekday. We thought it was no point going as there would be long queues and we would need to wait for hours to get our turn at most of the rides. So, we headed out to Malibu beach and returned the next day early in the morning to the place. This time we got in quickly and headed straight for the new Transformers ride that my brother was raving about. It was truly amazing. It was like a 4D experience. They make you sit in a small car like enclosure and then it is almost like you are inside a scene from a movie. You actually feel the jerks and the movement while you are right there sitting in the car! This has to be experienced and words cannot really do justice to the experience.

We did some more rides and the studio tour all of which were really great. 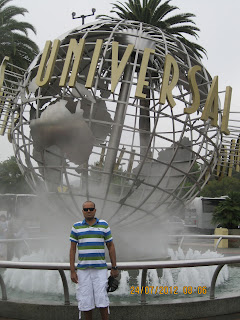 At the entrance of Universal Studios

We flew into San Jose that evening and hung out with family. The next day we visited Stanford University and the Apple campus. We also went over to have ice cream at the famous Ghirardelli Square. 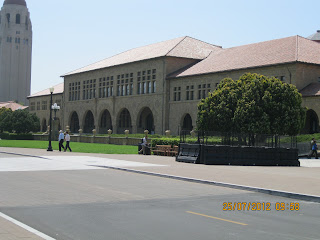 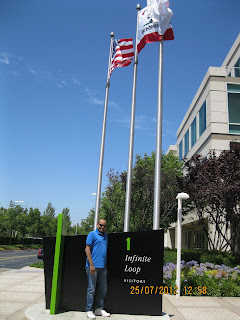 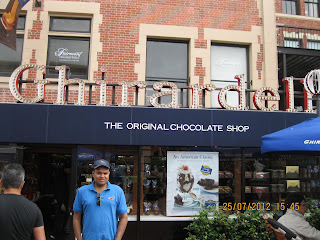 The next day Obul, Krishna, my brother Karan and I drove over to Yosemite National Park, which an aunt of mine insists on calling 'Yashomathi' in probably the worst ever 'desi' murder of an American name! It is a beautiful place. It is unbelievably huge and can take you hours to simply drive from one end to the other. It has huge sheets of rock, many creeks and waterfalls and a lot of natural beauty. The weather was fairly hot that day and all of us decided to jump into a creek that had ice-cold water which was spectacularly clear. 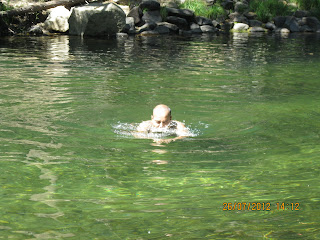 A creek at Yosemite

We stayed the night there and after visiting some of the spots there returned the next evening.

That night, my friend Krishna took me to Chipotle, a mexican food chain. I had some very tasty Tacos. My brother Karan loves Chipotle as well and insists that they add something to the food that gets you hooked to them forever. I couldn't agree more! We followed up with some frozen yoghurt at (I forget the name of the place, grrrr!). Apparently, in the US many people are hugely loyal to yoghurt companies as well. They have their favorites and insist that their favorite is really the best. Now, where did I hear something similar?

Thrinath Chakravarthy Jalamadugu said...
This comment has been removed by the author.
August 8, 2012 at 10:43 AM

Thrinath Chakravarthy Jalamadugu said...
This comment has been removed by the author.
August 8, 2012 at 10:48 AM

Kamal! Nice reading through and some memories of when i visited US hit me.

There was a chipotle fairly close to the studio at Olive Blvd where i stayed in St. Louis . I got to taste chipotle! It had a nice spicy, crunchy, crispy taste. Being a veggie, i got very little options to stuff into the tacos and burritos!

Spicy is the taste which you would crave for when you go outside india, as hardly you can find food with our indian sense of spicy ;)