Poorna Tiffins, this is your last chance 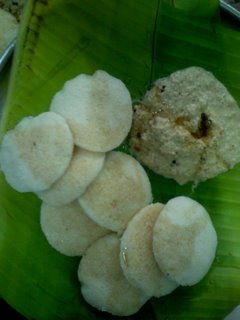 I don't remember since when I have been going to Poorna Tiffins. Its been a few years at least. Every Sunday morning, I religiously visit this joint about 12 kilometers from my house and relish piping hot idlis topped with ghee along with the coconut chutney. I have introduced many friends to this place and they have, without exception, absolutely loved the place. My friends and I have even had two idli-eating competitions here!

I have never had problems with the taste of the idlis here until now. They would always be very soft - they would almost melt in your mouth. However, for the last couple of times, the idlis weren't as good as usual. It was very disappointing. Now, they were better than many other places. But definitely not Poorna standard! The trouble is they have set such high standards that we have really been spoilt! Anything less and there's bound to be a lot of consternation!

Unfortunately I can't be bothered with Poorna Tiffins' internal problems. I want my idlis and I want them soft! Making the 24 kilometer (12 km, two ways) trip every week needs to yield good dividends. Otherwise, its just not worth it. Of what use is a pilgrimage if you can't get a darshan of the presiding deity?

I decided last week on my way back that I would give them one last chance. If they don't fix things and get the softness back into their idlis, it is going to be "Farewell, Poorna Tiffins". It would be a sad day in history. But I don't see any other way out.

UPDATE: The idlis were great!
food

Madras Hash said…
Try the Chennai Idli dough that you can buy in many stores in Hyderabad but not in Chennai :(

It is better than Poorna Tiffins and Murugan Idli.