on November 08, 2013
I have been a couple of times to Pune in the past. Both times it was en route to the hill town of Mahabaleshwar. Once it was on a holiday with family and the other time it was for cousin Pooja's wedding. The wedding was in the last week of December and I remember the nights in Mahabaleshwar were biting cold!

This time however I was actually going to Pune for the launch of our eighteenth dialysis centre. Vikram and I went to the airport together and from there hopped on to the Air India flight to Pune. I have heard many stories about the horrors of traveling by Air India. Thankfully, our flight was without any hitches if you do not count the old, less than beautiful air hostesses.

When we walked into Pune airport, we were quite surprised with it. Very old school, no modern facilities, very, very basic. Contrast that with our Hyderabad airport and a sense of pride fills you! Many people have rated Hyderabad airport as one of the best in the country. I am not a frequent flyer to give that kind of verdict but Hyderabad airport is definitely very good! Pune, on the other hand could really do with some modernisation. It is after all, one of the most important cities of the state of Maharashtra.

We drove straight down to Jehangir Hospital from the airport. The hospital was very well done up. Not five star but tastefully designed. There were wildlife pictures taken by its Chairman adorning the walls that added a cheerful flavour to the hospital's interiors. We made our way to the dialysis centre and were very pleased with the way it had come out.

We realised over the next couple of days that the hospital's entire team right from the Chairman, Sir Cowasji Jehangir BT and the CEO, Mr. George Eapen to the administrative staff to the clinical staff and right down to the ward boys, everyone had this warmth exuding from them which made our visit to the hospital very pleasurable. The hospital is known to have high ethical standards and we could feel this throughout.

They organised a dinner in our honour that night and the top management of the hospital attended. We got a chance to meet the Chairman, Sir Jehangir, some of the trustees and the nephrologists. First time a hospital partner did this for us!

We have a small pooja during the launch of all our units. With eighteen centres across the country in  places as varied as Alleppey in Kerala down south and Agra in Uttar Pradesh up north, it is striking to see differing styles of the same pooja! I guess the basic pooja might still be the same - probably from the Vedas - but local flavours get added and the pooja keeps getting small modifications over generations. Over centuries, the final outcome looks entirely different in different parts of the country!

The Pune unit pooja happened on the 6th of November around 9:30 in the morning. We had Vikram, a senior member of Jehangir Hospital and our nephrologist partner Dr. Shrinivas Ambike sit for the pooja. 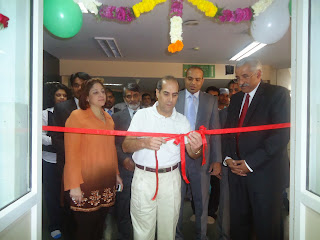 The inauguration followed the pooja. So, we had the rather funny ritual of everyone inside the unit go out of the unit by bending to cross the inauguration ribbon! The unit was inaugurated by the Chairman, Sir Jehangir and the CEO, Mr. George Eapen. There was the traditional lighting of the lamp by Vikram and me and other Jehangir Hospital staff. Everyone present was thrilled with the way the unit had come out - bright and cheerful with the NephroPlus green doing its bit to add life to the interiors.

Vikram and I took the evening flight to Hyderabad. We had received an SMS that morning that the flight would now take 2 hours instead of the planned one hour! We figured that they were putting us on a slower flight. When we enquired at the check-in counter though, we were told that it would take an hour and fifteen minutes. This brought some cheer!

I finally got home and was relieved to be home after a very tiring couple of days. When I am not on my routine home-office-home schedule, I tend to drink more fluid than usual. This happened this time as well. I was up by about 5 kgs at least. There was a feeling of chest congestion by the evening. I was very happy to get on to the machine and have the excess fluid removed. I really need to find a way to restrict fluid when I am traveling. It is not impossible. I did a fantastic job during my Oceanside weekend where I missed dialysis for 2 nights and managed quite well. Its just that since this is only one night, I take it a little easy!
diary