Have those protesting against the film ‘Padmavati’ seen it? 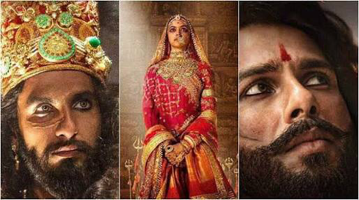 The protests against Sanjay Leela Bhansali’s film Padmavati have reached sickening heights. Some have called for the beheading of Bhansali while others have threatened to chop off Deepika Padukone’s nose. A state chief of the ruling Bharatiya Janata Party has openly announced an additional reward for Deepika’s nose.
I have only one simple question for the protesters. Let us keep aside the aspect around freedom of speech and expression for a minute. Let us assume that we are a society where one cannot speak out against anyone or anything. Let us assume that we are still under Indira Gandhi’s emergency. Now, have the protesters and the thugs demanding Bhansali’s head and Deepika’s nose seen the film? Do they know exactly what they’re protesting against? Are they certain that the Queen Padmini is shown to be attracted to Alauddin Khilji in the film?
The fact of the matter is that no one who is protesting has actually seen the film.
Bhansali has shown the film to certain sections of the media. Justice Arnab Goswami was one among them. Here are his words about the film: “...every scene of this film is a cinematic tribute to Rani Padmavati. .... when the movie will be released, Karni Sena will appear like idiots.”
So, what is this fuss all about? Why are state governments, one after another, banning the film? Why has the producer been forced to delay the film to next year? Is it going to be released when certain elections have been completed? See a pattern here?
Have we as a society, degenerated so much that we get carried away by mere rumours and speculation? Why are the BJP ministers silent? Why are some of them tacitly supporting these villains?
Coming back to the issue of freedom of speech, the constitution of India guarantees every individual to speak his or her mind provided this does not incite violence or cause a law and order problem. As a society, we should have been mature enough to hear out different points of view and express our own. If you don’t like a film, don’t watch it. If you don’t like a book, don’t read it. It is as simple as that. Nothing should be banned because a certain section of the population does not like it.
We, as a nation need to grow up. The government needs to step up and act against elements who incite violence. We don’t want mini-Gujarats-2002 all over the country.
at November 26, 2017

Email ThisBlogThis!Share to TwitterShare to FacebookShare to Pinterest
Labels: films

Don't you think this is all paid gimmicks. Innovative way of doing publicity by movie makers.

I don’t think so. The film was supposed to release on Dec 1 and is now postponed to next year. This itself results in a lot of issues for the producer.

You mean Bhansali bribed BJP, the central government and other state governments? ;-) That's equally bad too. Either ways it's the governments that are messing it up unfortunately - Why did they have to ban it in some states? Why did they not take action against people openly threatening the artists involved in the film?