In search of the perfect Adadiya

Hyderabad hardly has a winter these days. We just got done with our grand one week of this season recently. When the temperature goes below fifteen degrees Celsius, you will find Hyderabadis have taken out their woollens and have lit bonfires at night. At those temperatures, folks in Delhi would flaunt their shorts and sleeveless tees.

For whatever little cold weather we get, we try to enjoy things you associate with winter. One such favourite of HBCGs (Hyderabad Born Confused Gujjus) is the Adadiya Pak or Adadiya in short. A sweet made out of ground Urad Dal (Skinned Split Black Lentils flour) roasted in ghee and mixed with sugar and spices, the Adadiya is a dish that possibly originated in the district of Kutch.

Parts of Gujarat can have punishing winters (going strictly by Hyderabad standards) and the people there probably invented dishes like the Adadiya and Lapas, another famous winter sweet to give warmth to the body. The spices in these dishes generate heat and helped cope with the falling temperatures.

How much these spices actually helped in warming the body, I do not know. However, the taste got people hooked for life. 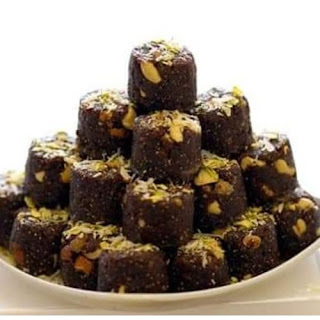 My earliest memories of this wondrous sweet are from childhood when a grand-aunt who stayed in Chennai used to send us plastic boxes filled with Adadiyas packed neatly in rows of three garnished with crushed almonds and pistachios. Hansa Mami, my grandmother's cousin brother's wife, was a legendary cook. Her kitchen was busy throughout the year. Come summer, and she and her dutiful daughters-in-law would get busy preparing pickles of myriad kinds. Winter was when things like Adadiya would keep them busy.

Hansa Mami's Adadiyas, though, were truly her best production. A tad spicier than what others made, you could feel the spices tickle your tongue as you took a bite. Some people make the Adadiyas cloyingly sweet. What, pray, is the difference between your regular sweet and the Adadiya, I ask?

Hansa Mami's stocks run out soon, unfortunately. Then it is up to you to figure out other sources. This is not a sweet you get at your traditional halwai. You need to scour the streets of your city to look for shops whose owners are familiar with Kutchi fare.

In Hyderabad, there is a famous Sri Gujarati Ram Bharose Sweet Mart in the Koti area. This shop had Adadiya one winter. Not half as good as Hansa Mami's, though. One Good Samaritan recently told us that there was one more shop that sold Kutchi stuff, called Paras Agro and Food. My parents went to this shop and found that they stocked Adadiya as well. They also stocked other Kutchi delicacies like the Pakwan (also known as the "Cardiologist's least favourite food" given that they make it using refined flour and deep fry it in ghee). They had good Adadiyas. Well, still not as flavourful as good old Hansa Mami's but then, at least you could get however many you wanted.

My brother, Prasan, doesn't share the passion I have for traditional Indian sweets, least of all Adadiya. He wonders what all the fuss is about? The length of the Hyderabadi winter, also, doesn't logically justify the hunger for Adadiyas. But what the hell. Who says you needed to do whatever is logical?