How much fluid weight do I gain between two dialysis sessions? 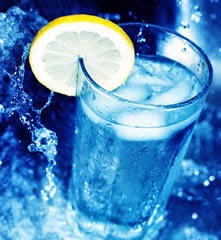 A great thinker had once said, “Never ask a lady her age and a dialysis patient his weight gain.”

I dialyse every day (pretty much) and I typically put on 3 kgs between sessions unless it is my day off, after which I am about 5-6 kgs above my dry weight. If I am travelling and have a day off, it could touch as much as 7 kgs.

There, I have said it. No, no, please don’t berate me. Don’t tell me about the dangers of the high gains. Don’t even ask me how I manage to put on so much.

So, now that I have answered the question, please don’t ask me this again and more importantly, those who deal with me on a daily basis, please, never ever, ever ever say something so ridiculous like “such a high weight gain” again.
at April 24, 2015 2 comments:

The NephroPlus founding team was to be honoured with the "Dynamic Indian of the Millenium" Award by K. G. Foundation Coimbatore! So, the three of us, Vikram, Sandeep and I planned to go to Coimbatore for the event on the 5th of April. We also thought a celebratory break of a day would be just right in the cool climes of Ooty after the event!

Ever had a song stick in your head with no hope of letting it go for many hours? Well, I had that happen to me many-a-time and a few days before the event, the song from the movie Padosan, Bhai baddur was stuck in my head except that my head, all excited about the trip, conveniently replaced the first two words with Coimbattooor-Coimbattooor! Here's the original for those inclined:

Dynamic Indian of the Millenium

The K. G. Foundation awards distinguished Indians who have made some impact on society every year with these awards and we were quite surprised that we were picked for the award this year! The foundation is headed by the dynamic Dr. G. Bhaktavatsalam, an extremely active doctor, who heads the K. G. Hospital of Coimbatore and is a Padma Shri himself. The organisation of the awards event was really amazing. All the finer details were taken care of. The award itself was a plaque, a shawl and a memento. After the awards were given to us, they were collected back and were sent to our car. By the next day, an album with pictures from the event that featured each of us separately was delivered to us! Truly remarkable! 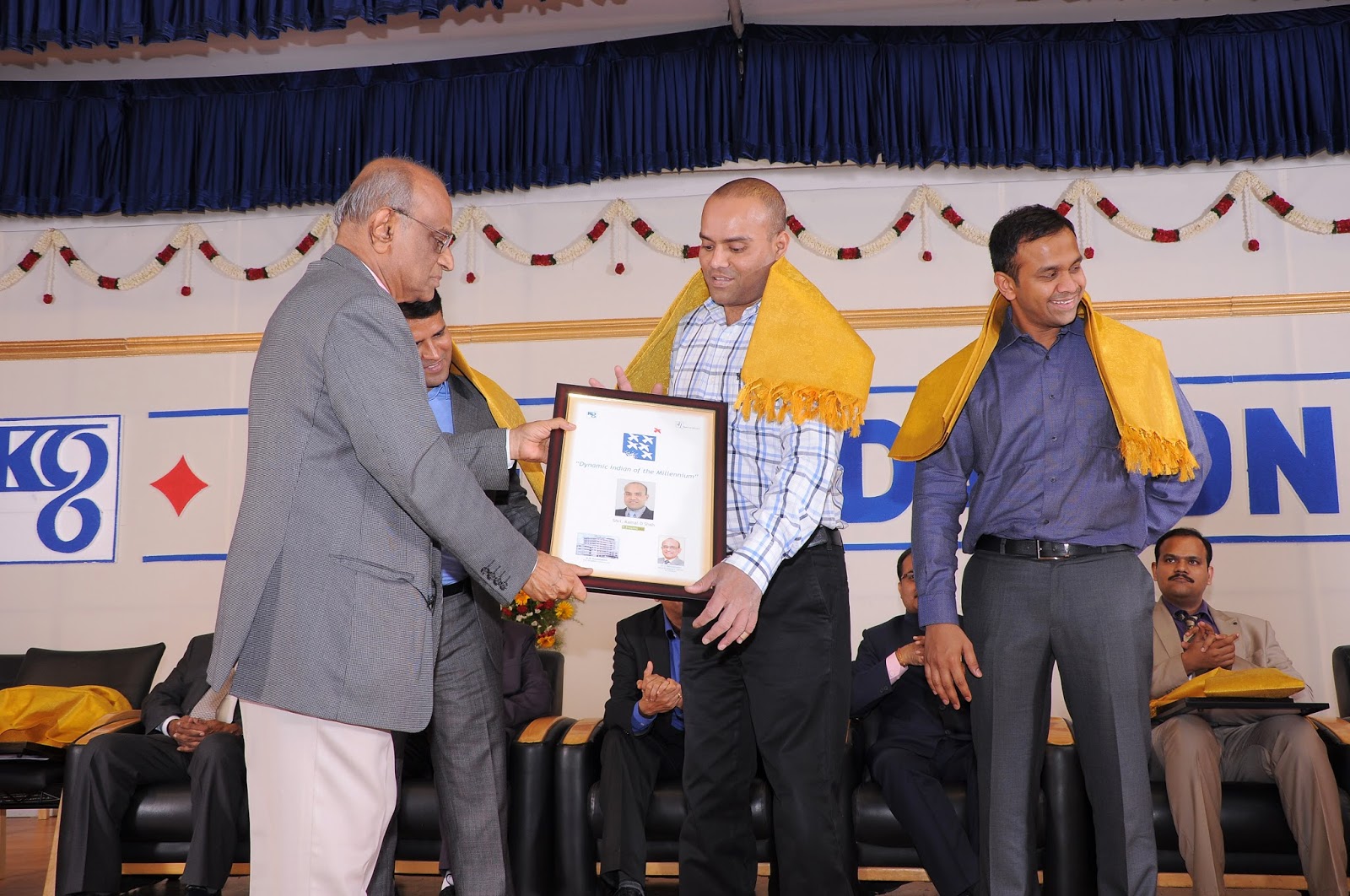 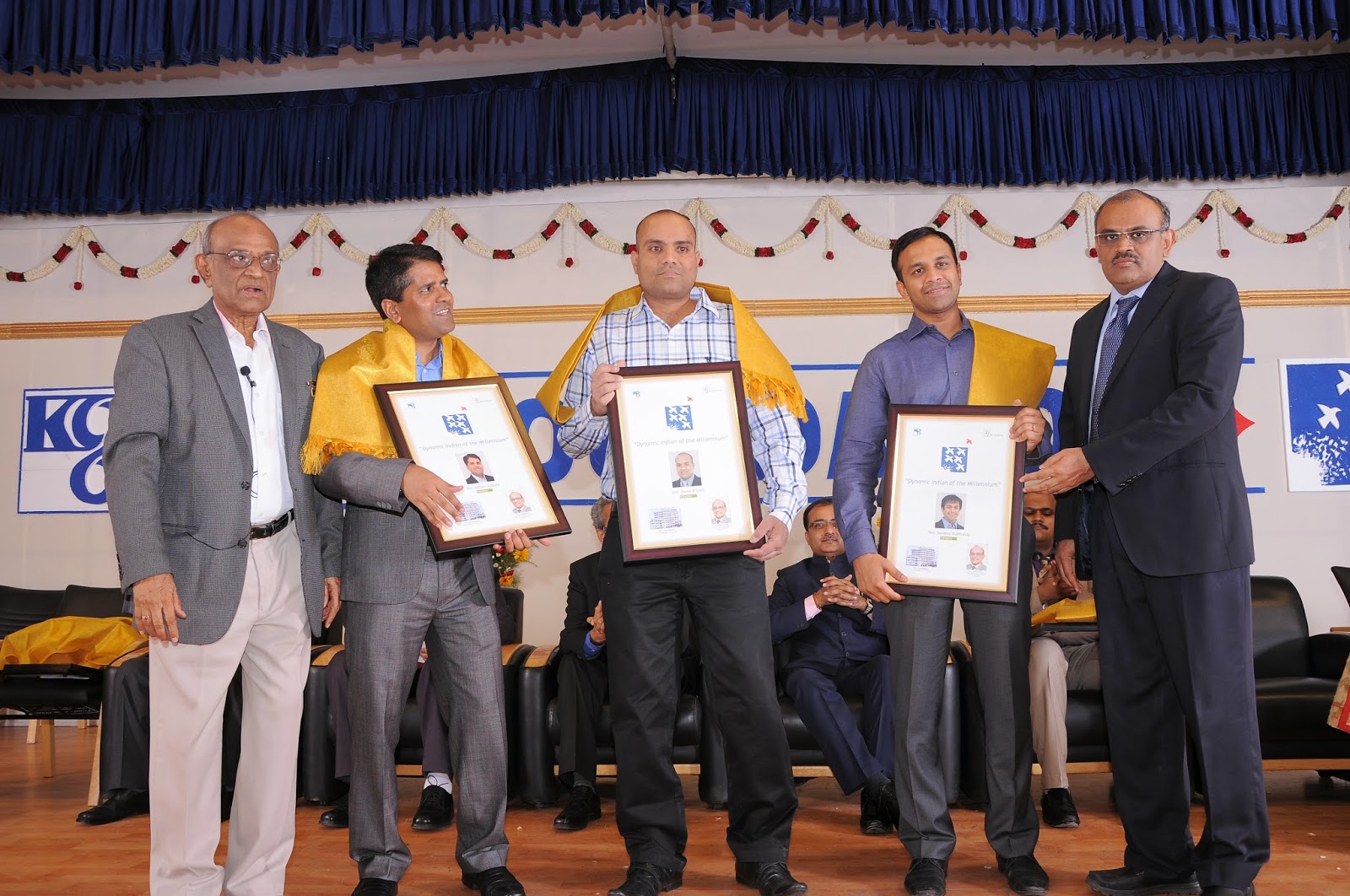 We had rooms booked in Club Mahindra Derby Green at Ooty. As soon as the K G Foundation event completed, we headed out in a cab for Ooty. The three and half hour drive that culminated at around 11 p.m. was quite tiring. As soon as we reached, we checked into our rooms. The resort was a three hundred year old property. The rooms were made out of fine wood and had an old-world charm about them.

The next morning we got up late and headed for the restaurant for breakfast. We had a Maruti van come and pick us up to take us to the restaurant. The resort is so vast that for people with creaky bones like me, just going about from place to place would be an arduous task!

We then got ready and decided to go around Ooty. We first went to the Ooty lake. Just outside the boat house, I chanced upon some lovely Tota-kairis and passion fruit. We had our fill of these fruits which were really delicious. We then took a pedal boat and took a half hour boat ride in the lake. 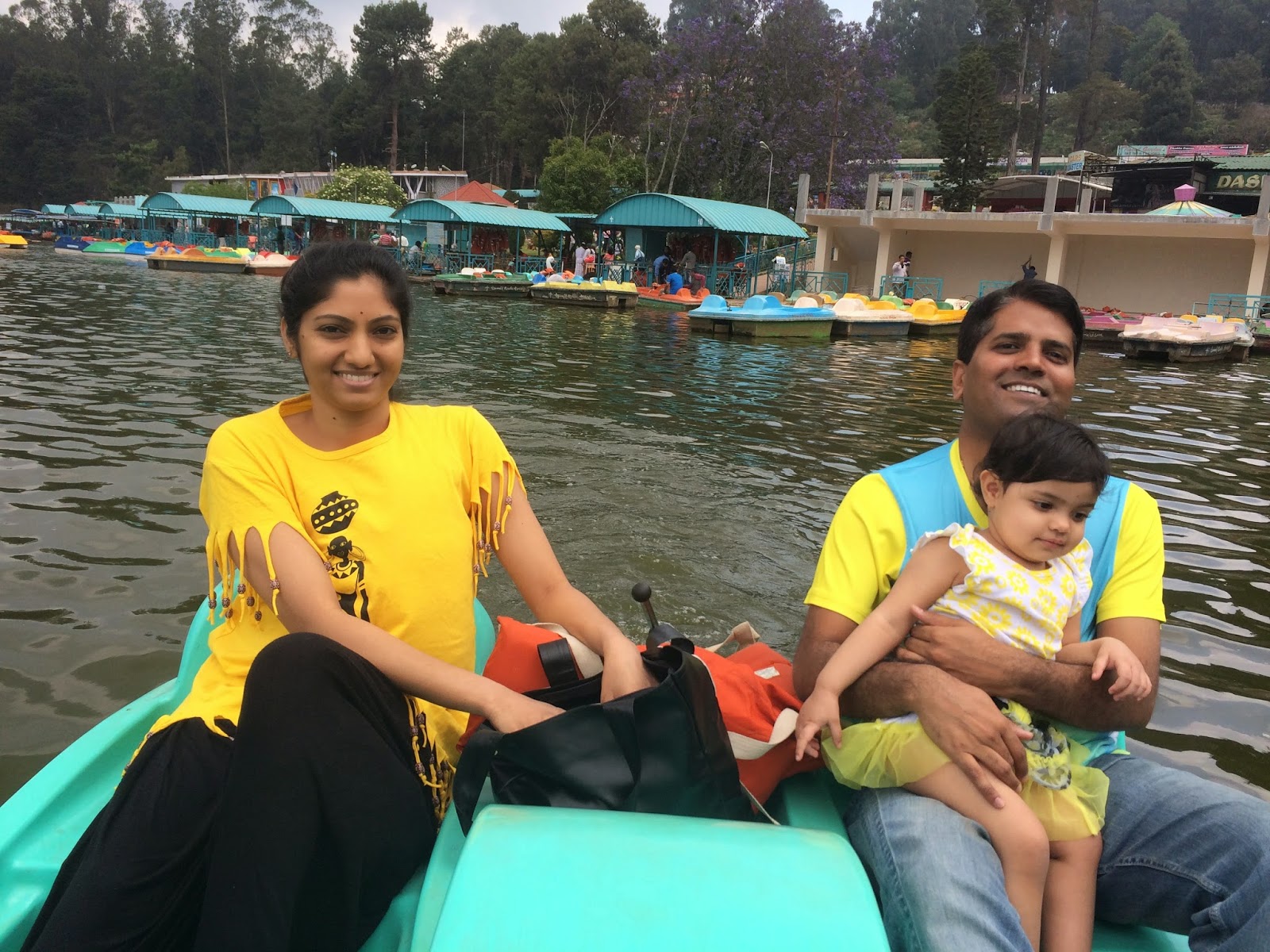 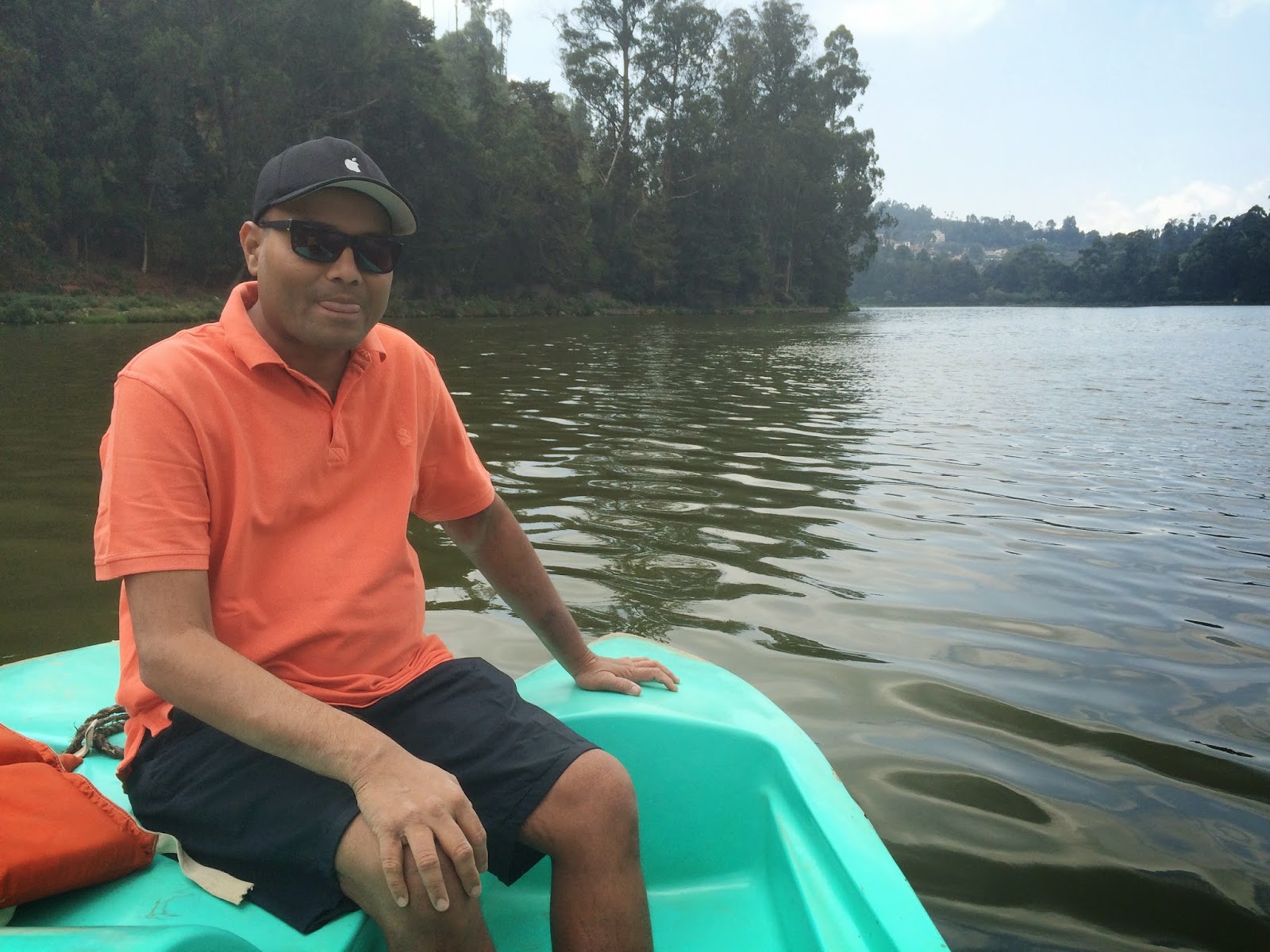 How not to market Tea!

We then went to the Government Tea Factory where they show you how tea is processed from the leaf that is picked from the gardens to the Cut-Tear-Curl process and the roasting to eventually give you the tea that you actually brew. There's a rather sad sampling that you are offered after which you could buy what you liked. To put it mildly, a much better job could have been done.

To me, tea is something that is almost divine. I enjoy my three cups of Darjeeling Orange Pekoe over my day with such relish that this came as quite a letdown. I was looking forward to an hour of fondness, it turned out to be an hour of disappointment!

The driver then told us about the Doddabetta Peak which was supposedly the highest peak of the Nilgiris. We drove down to the point where there is an entrance to the place. You had to walk about half a kilometer to the point where you could get a great view of the valley. I, with my creaking bones and Vikram and Manju with their year old daughter decided to give this a miss. The drive to the place however was truly amazing. The road to the point is quiet and quaint, with eucalyptus and teak trees on both sides growing wildly. We were quite happy to take the drive back to our hotel for a nice, short nap. 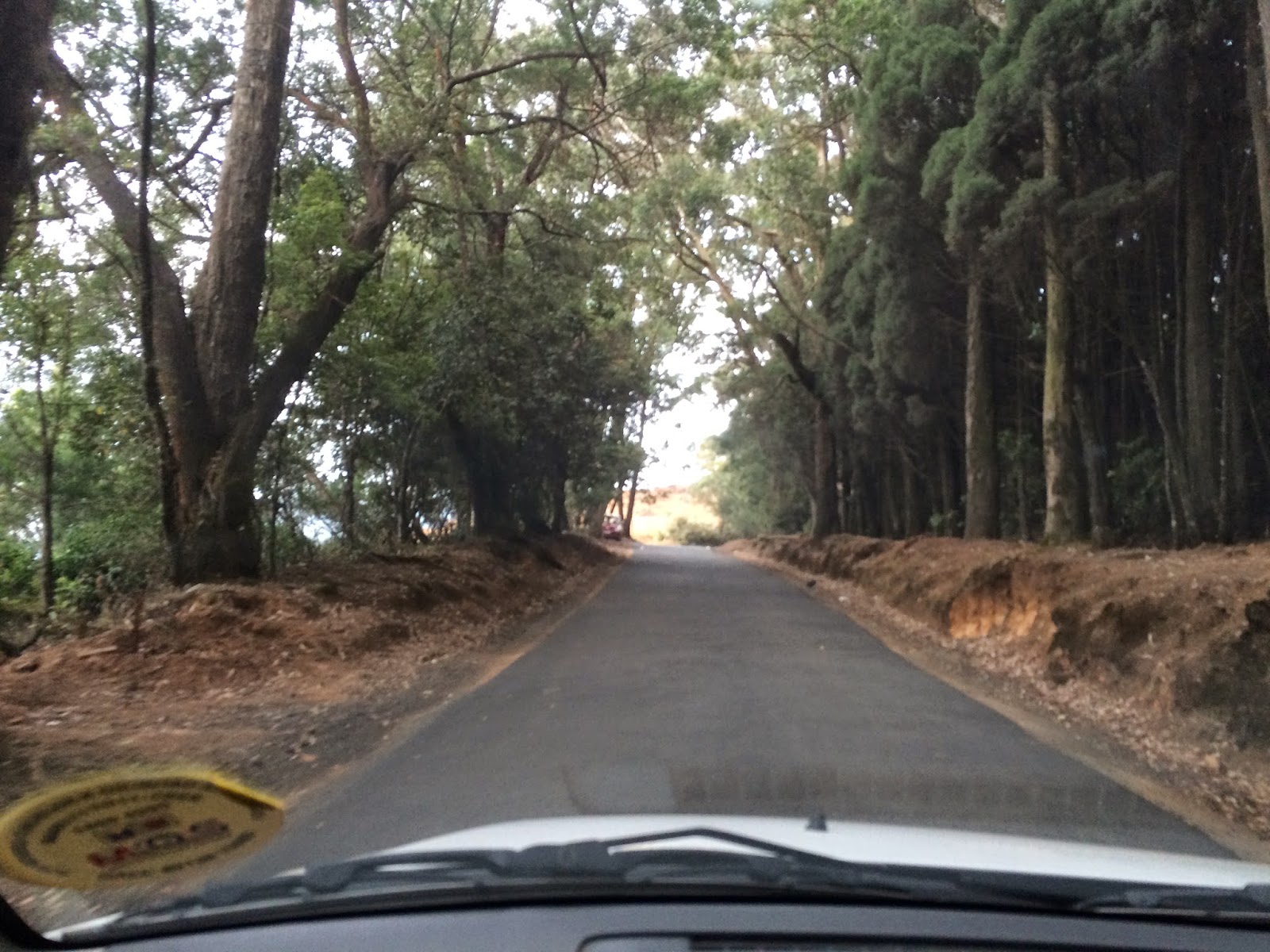 The evening saw us getting massages at the hotel spa which relaxed and rejuvenated us. I went to the local market and bought some passion fruit and mangoes for my parents. We had dinner and turned in. We were back home the next afternoon.

Though this was a small trip, it served the purpose - that of a short break and an opportunity to recharge our batteries. In the modern day and age, where you get so tied down with your daily work, even a short trip like this can really help. Especially with work like ours in NephroPlus, where every day can bring on a new challenge, where every decision we take is critical and affects a lot of people, it is essential for our minds to be refreshed once in a way.
at April 12, 2015 1 comment: