The truth behind the 13 year old Jain girl's fasting accident

Recently, a thirteen year old Jain girl based out of Hyderabad, Aradhna Samdariya, died after a 68 day fast. The press covered this incident quite extensively. It also made it to some national news bulletins. Many people called it a 'cold-blooded murder' by the parents for which they should be 'locked up in prison'.

First, some facts. Jainism encourages fasting. But it clearly articulates that all religious activities including fasting, donating money etc. should all be done 'yatha shakti', as per each individual's capabilities. It never recommends to go beyond your capabilities. Yes, it also encourages you not to fall short of what you're capable of. Fair, in my view.

There is absolutely no evidence of the parents forcing the child to fast beyond her wish. This is mere speculation by a section of the media. The parents probably encouraged her. There is a very important difference between 'force' and 'encourage'. They did not deter her from fasting. They did not stop her from fasting. They encouraged her to fast. If the girl wanted to stop, she definitely could have stopped. So, to charge the parents with 'culpable homicide' is totally unfair. The parents have committed a mistake, a very serious mistake. They did not cause the death of their child. There is absolutely no ground to proceed legally against them.

Latha Jain, in an interview with NDTV stated that this was cold blooded murder. I would like to ask her whether she understands what cold-blooded murder even means. Please don't sensationalise the loss of a child to get your two minutes of fame on television! Some people have called for the society to not provide any legal help to the parents. Just to put things in context, I would like to remind them that even Ajmal Kasab was provided legal aid! Are the parents worse than him???

There have been wild, baseless allegations about the father of the girl having had losses in his jewellery business and that they were advised by some sadhu in Chennai to get their girl to fast for 68 days! From where has this come? What evidence does anyone have to prove this? How low can the media go?

There have been many discussions about allowing children to fast or not. Jain fasts are very rigorous. The upvaas consists of no food and only water. Water is also to be consumed only up to sunset. The same girl did an 8 day fast and a 34 day fast in the preceding two years. She was completely fine. Nothing happened to her. There are hundreds of children around the country who fast for various number of days during the 'paryushan' every year. Nothing happens to any of them. Where were the child rights activists when these fasts went off well? Some people argue that 68 is too high a number for a thirteen year old. Accepted. What is the right number? 1, 3, 8, 16, 30? Who is to decide? Each individual is different! There can be no fixed rules for all!

Any individual should fast only up to a point where he or she is able to independently do his or her day to day activities. Beyond this is not advisable.

What happened with Aradhna Samdariya was a very sad, horrible mistake. A mistake. Nothing more. Nothing less. She should not have been allowed to go to a point where she was unable to stand, sit or move about independently. Let us not ostracize the parents. They have lost their daughter. They must already be feeling so miserable. To proceed legally against them is a travesty of the law.
at October 11, 2016 No comments:

Look for joy in the little things in life 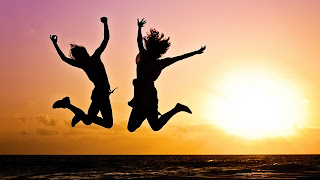 Many articles I have read in recent times have suggested that happiness is usually found in experiences rather than products. They suggested that the initial thrill on buying an expensive new thing such as a fancy, new car, a new phone or a new home usually fades away quite quickly. The joy of experiencing something like a holiday at a new place, doing something adventurous like rafting or zip-lining gives you happiness that is felt for a long, long time and gives you memories that can last a lifetime.

I find this to be very true. When I buy a new iPhone, within a few weeks or at best a few months, the initial excitement is dead and gone. And I actually feel bad when the new iPhone is announced because it is usually so expensive that I cannot afford to buy one so soon after I've just spent quite a bomb on another one!

On the other hand, I can never forget the trips I've had. I relive the joy whenever I think about them, talk about them with people I've been with. Take the 2012 Alaskan cruise for example. Just the other day, when Dinesh wished me on my birthday, we reminisced about the fantastic time we had. This, after four years had already passed! I often revisit the videos of the Niagara Falls and even much simpler places, closer to home like the natural water slide at Chepa Rai! I still feel the thrill of these places.

I firmly believe the best things in life are the simplest. I savour every sip of my morning Darjeeling black tea, love my Sunday morning Idli jaunt and relish my morning swim. When you think about these things, you realise that you don't need too much money to experience true happiness. We often get into this endless cycle of trying to make money because we believe that in money lies the secret to happiness. It is true that we need money to take care of the basics. But beyond a point, money cannot make us happy. It is how we look at life and how we try to find those moments of true happiness and genuine joy that eventually dictate how happy we actually are.
at October 02, 2016 1 comment: